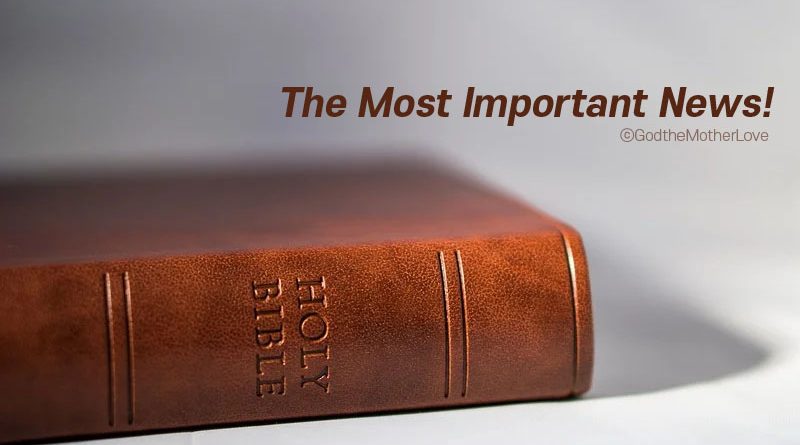 The Spirit and the Bride have come in the flesh!

Today, I went out to deliver the most important news that deserves full acceptance after keeping the Feast of Trumpets in Zion(World Mission Society Church of God). Could you guess what the most important news is? It’s about the Spirit and the Bride, who are to come with living water. According to the prophecies of the Bible, only those who receive the Spirit and the Bride will be prepared for the kingdom of heaven where there’s no more death and sorrows. Usually, people want to live forever with happiness. However, not everyone! 2000 years ago the Jews also wanted to be saved. For this reason, they tried to do their best to keep God’s commandments. Nevertheless, most Jews failed to get their goal. Of course, before Christ’s coming in the flesh, they seemed to be saved. But, when God came in the flesh, they refused to receive Him even though He testified to Himself through the Bible. On the contrary, some people found the living within Christ!

For example, Apostle Paul, who had persecuted early Christians with the belief on Jehovah(Acts 7:54~60), came to receive Christ Jesus on the street to Damascus(Acts 9:1~18) in God’s grace. Before receiving Christ, he thought that God will never appear in the flesh. This was why he was still breathing out murderous threats against the Lord’s disciples. Then, what made him change his attitude? It was because he heard the news from God.

At any rate, it must be the most important news to Apostle Paul that God came to earth in the flesh!

God the Father has come a second time with God the Mother!

We are living in the last age of the Holy Spirit. As for you, what is the most important news? What information do you want to obtain? And, what information do you want to exchange with your neighbors? As for me, to meet the Spirit and the Bride is the most important news. In other words, recognizing the Savior in the flesh must be the most important thing in the world. Why? Concerning this matter, the Bible definitely warns that if anyone’s name was not found written in the book of life, he will be thrown into the lake of fire(Revelation 20:15). Up to now, ever met the One who will endow you with living water? Those who do not know about this One will face the same end, the second death.

Today, I give all thanks to Elohim God who helped me to deliver this great news!

20 thoughts on “The Most Important News!(Christ Ahnsahnghong and God the Mother)”